The Cupboard of Indie Nonsense is being reopened following a special request from my pal Dave.

As the core business of Indie Nonsense is indie music, I’m going to put on display a few of the oddities and rarities that The Cupboard contains.

I was having a chat with a couple of pals a while back about, among other things, the silly money that some records and band memorabilia go for on ebay. I haven’t looked up prices for any of these because it just makes me roll my eyes but I do know that collectors can get a bit ‘keen’ for some of this sort of stuff. These are not for sale.

Anyone who has ever read this blog will know that I’m a bit of a Loop fan, so I’m starting with a little bit of Loop-related nonsense. First up, The Field Mice.

Being a flexi-disc puts it in the category of REALLY indie nonsense. Flexi-discs are, unsurprisingly, thin, flexible little 7″ records* which were often given away with magazines and fanzines or sold for about 50p at gigs.

This one is extra-indie because it’s clear vinyl. 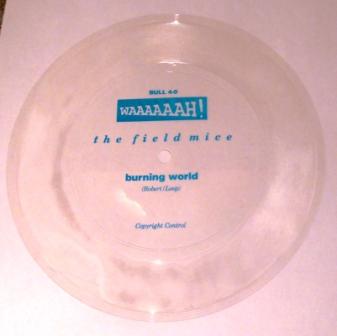 Incidentally, in the making of this post, I’ve discovered that I’ve actually got three of these! Random.

Here’s another Loop-related disc, only this time, it’s the boys themselves.

This hard vinyl disc, Sniffin Rock #8 (SR005A7), was given away with Sniffin Rock magazine in 1989 and contains 3 tracks; ‘Pulse’ by Loop, ‘For Dude’ by Gaye Bykers On Acid and the delightfully entitled  ‘Wanking In The Bog’ by The Abs. 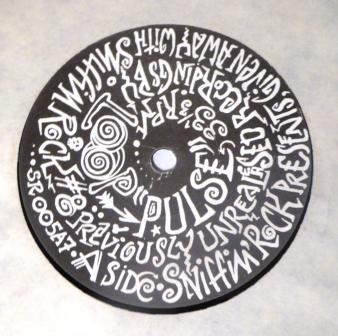 As the wonderful Teenage Fanclub are currently on tour, wowing audiences up and down the country, I’d decided to include a few little nuggets of Fanny nonsense here but then I realized that I’ve got loads of TFC 7″, so I might do a whole separate post of those. Here is just one goodie to finish with. 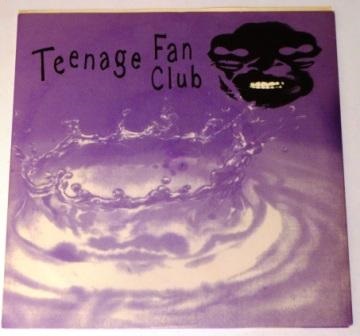 This song, ‘Everybody’s Fool’ is the final track on the Fannies’ first album ‘A Catholic Education’ (PAPLP004) and it contains the classic lyrics “‘I don’t fucking care, what clothes you wear, you’re still fucking square”.

In late 1990, Teenage Fanclub were touring with Gumball and did this hilariously good fun free gig on a Saturday afternoon at Rough Trade, Covent Garden. So I had my record signed by the band and by BMX Bandits guru Duglas T Stewart.  I actually have a photo of this historic moment.

But wait, there’s one signature missing. Where’s Raymond? I’ve no idea. Maybe he wasn’t there that afternoon (he isn’t in any of my photos).

Still, this is a prized possession and the splodgy-evil-grin-Norman-face in the top right of the front cover, and across the back cover, was replicated on another prized possession; the corresponding badge. 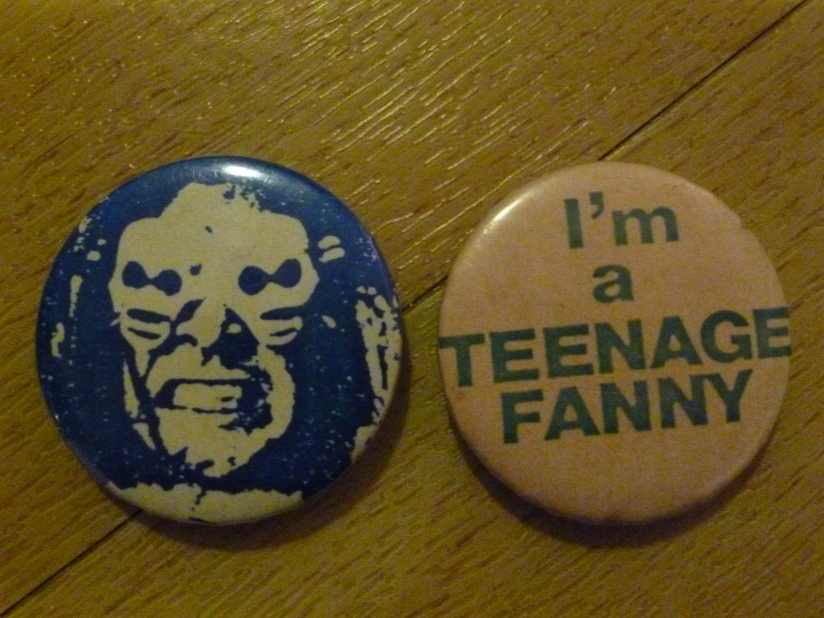 If I ever lost these badges, I would cry so hard.

*other sizes are available.